BUYING A GUN WITH A CRIMINAL RECORD 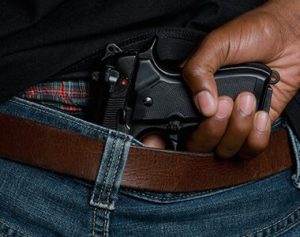 About 15 years ago, one of my clients pleaded guilty to a simple drug charge levied in another state. It was the only conviction on my client’s record. Recently, the client submitted a gun application form that included several screening questions. Fifteen years is a long time and the client answered one of the screening questions incorrectly. Now, my client has been charged with a felony for making a material misstatement about the prior drug-related conviction.

As a federal law, the Gun Control Act of 1968 prohibits felons from owning or buying a firearm. The landmark gun control law also bans anyone who has spent more than two years in prison on a misdemeanor charge from owning or purchasing a firearm. According to the Brady Center to Prevent Gun Violence, Pennsylvania ranks in the top 10 states for enacting the toughest gun control statutes

How Gun Laws Work in PA

PA gun control laws permit the open carrying of a firearm without having a license, which includes placing a gun in a holster that is attached to a belt. However, you must apply for a License to Carry Firearms (LTCF) to carry a concealed weapon in the Keystone State. If you have been convicted of a violent crime that resulted in a felony or a misdemeanor, you are not allowed to purchase a firearm in Pennsylvania.

Here are the other restrictions on the ownership of a gun in PA:

Pennsylvania requires residents to submit a Federal Firearms Transaction Record Form (4473) to purchase a firearm. The form includes some questions that confuse applicants, which not only lead to the rejection of the form, but also land you in trouble with state and local law enforcement agencies. You do not have to make a material misstatement on purpose. State law does not care whether you intentionally presented misleading information or if the wording of a question produced confusion that led to you making a false written statement.

Here are the three most common mistakes made on Pennsylvania gun applications:

Much of the confusion stems from the timing of the misdemeanor sentences and how recent the PFA was issued.

How to Restore Your Gun Rights in Pennsylvania

You have the right to apply for the restoration of your gun rights in the State of Pennsylvania. However, remember that federal firearm laws take precedent over state firearm laws. If you have a felony conviction and you want to restore your gun rights in PA, contact our law office today to ensure you receive the full legal protections granted to the residents of Pennsylvania, as well as to the citizens of the United States.